Docker network architecture covers all network scenarios required for successful communication at the local, remote or cluster level. Docker enables it by deploying its native and third-party network drivers. There are various drivers but the default drivers that come with the Docker have local or cluster (swarm) scope. Docker network drivers are a high level presentation of networking capabilities. The physical layer of the network does not need to be specifically configured. At a low level, the Docker network is actually a Linux network because it uses all the capabilities of the Linux kernel to achieve its goals:

Network drivers that come with the Docker installation are: bridge, host, MACVLAN, none and overlay. All drivers have local scope except the overlay driver that works in cluster (swarm) mode. 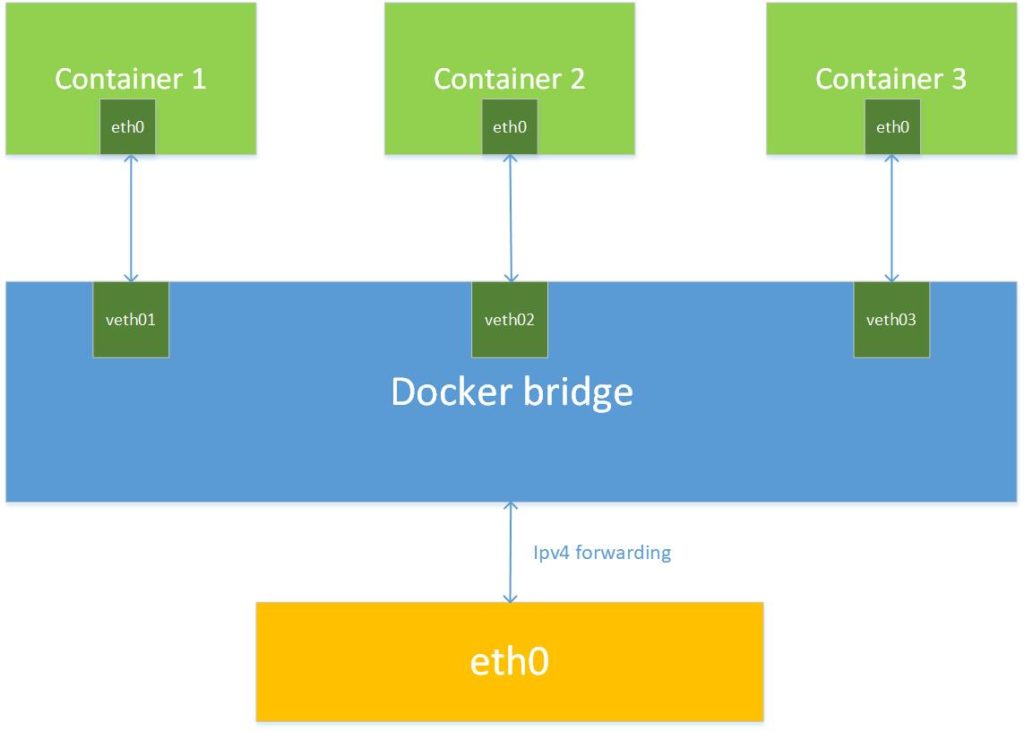 When Docker is installed, run ip a command to check new docker0 network:

There are three default networks: bridge, host and none

When in container press Ctrl+p and then q to exit container without stopping it.

With ip link command we can see two assets of veth adapters that belong to containers with ip addresses from docker bridge subnet 172.17.0.0/16:

If we do not want Docker Bridge to automatically assign a subnet, we can create our own bridge network and enter desired subnet range.

We will add additional network to centos04 – default bridge network:

And which containers belong to custom bridge network:

Notice that you can ping centos02 from centos01 by hostname:

On the other hand, no DNS service exist on default bridge network because of security reasons:

The only way to communicate within the default bridge via the hostname is to connect the containers directly via the –link parameter. However, this is an outdated method that is no longer recommended. If there are no DNS servers defined in the resolv.conf file, the container adds Google DNS servers 8.8.8.8 and 8.8.4.4.

When you run a containers there is some activity in DNS world:

1) The file on host /etc/resolv.conf is copied to the container

Start Ubuntu container and verify that content of resolv.conf file is the same as one on the host:

Things change when defining a custom bridge network that uses the services of a built-in DNS server that is part of the Docker engine. The file resolv.conf file is populated with the IP address of the embedded DNS server which is always 127.0.0.11. This service is only available between containers in the same network. For everything else, the embedded DNS server sends requests to the default DNS server. 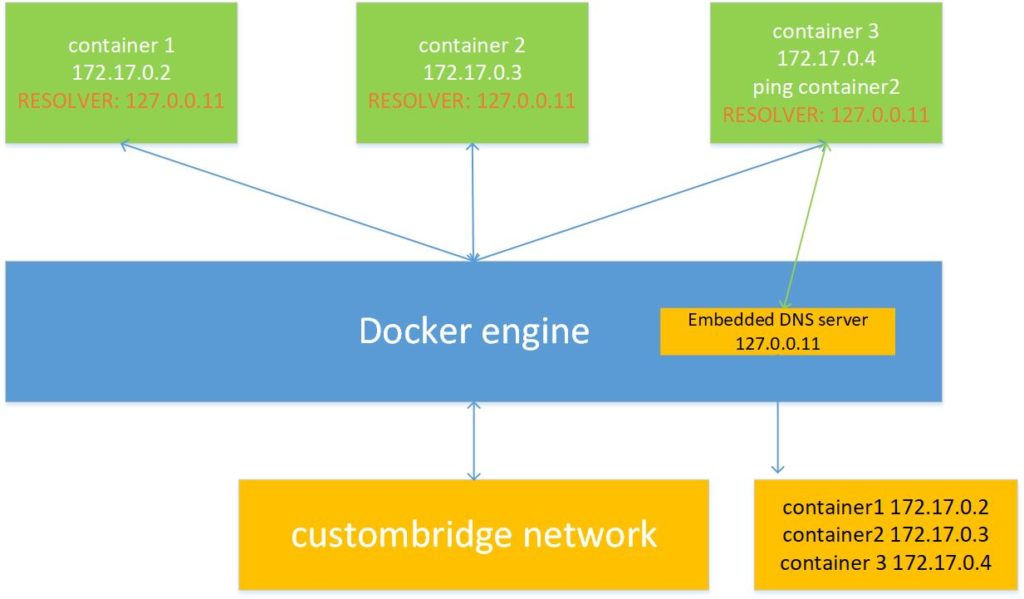 We can always define custom DNS either through the –dns parameter or by typing it in the /etc/docker/daemon.json configuration file. Example shows configuration of custom DNS when during container start:

In the docker bridge network, due to the additional network layer, it is necessary to configure port forwarding for all services running over HTTP and HTTPS protocols. All ports are available on the host, but inside the container which runs on additional network namespace, some things need to be configured to allow applications to be available outside the container itself. Let’s look at the basic rules:

However, this is not enough. In order for a port to be forwarded, you must specify parameter –p containerport: hostport during container start.  Another option is a flag – P where all ports listed in the Docker file are mapped to random ports.

Content of nginx Docker file has some exposed ports defined:

If we run nginx without –p switch things won’t work:

Access to containers within the same and external network

Attach to centos, install telnet and check if port 80 is opened:

You are probably wondering how firewalld works with Docker? We know that Docker uses iptables for network container segmentation. Firewalld is not in same story and not synchronized with iptables rules for Docker. During OS start, firewalld take into account all Docker rules for iptables. Things go bad during firewalld restart during OS runtime. Firewalld removes all Docker iptables rules breaking Docker communication. Docker service restart must always follow firewalld restart for changes to populate Docker chain in iptables.

Things are good as before:

The advantage of this configuration is better performance because no extra network layer. Disadvantage is that all container services can occupy all the popular ports on the host. Imagine several containers run and take all popular ports. This type of Docker network only works on Linux operating systems. Containers with this network cannot access any other network.

Check if nginx is running on port 80:

Docker MACVLAN network is also part of host network like Docker host network but all similarities stop there. In this type of network each container get its unique IP address form host subnet range. MACVLAN connects containers in the same network, if you want different subnets, external routing is required. It supports VLAN 802.11 tag protocol where containers can belong to different VLANs. This technique is used for applications that have a low latency requirements and need to have addresses from a host subnet. The disadvantage is the limited containers mobility because they are tied to the network configuration of the existing infrastructure.

Check the subnet you want to use for the containers:

Check that MACVLAN network is listed:

Check if IP address is assigned:

Containers can be run offline, which means that container does not have any defined network adapter except loopback. Containers can only be part of this network. The parameter –network none is used for this:

Check that there is no network adapter defined except loopback: