We were all wondering by now how to create our own images. All the time we are working with pre-built images. In this article we will cover subjects like how to create your own custom image and multi-tier applications which runs as a service. Talking about multi-tier we will show you some cool features which you can use when building multi-tier apps. So let’s start and create Docker image.

There are two ways of creating custom images: commit operation inside container itself and Dockerfile. First option is not recommended because you rely on parent image and already prebuilt container. In other words you run the container, did some changes and run the commit command. It is not so happy solution if you want clean image which was built from beginning.

Create Docker image with Dockerfile is preferred option when you want to build your own images. Focus is on quality parent image – maintainability is then very easy especially if parent image is kept clean by its author. Motivation of building custom images include: adding runtime libraries and SSL certifications. Changing the Dockerfile can trigger updates like removal of unwanted libraries. It is not possible to use inline comments and keywords are not word sensitive.

Base or parent image?

Parent image is prepacked image which is source on which other layers are built.

For example, RHEL or Centos have their base images which are used in first line of Dockerfile with word FROM:

Base image has no parent image in FROM but uses minimal image that is required to build container. It uses FROM scratch directive:

Scratch base image can be found on Public Docker repository – Docker Hub.

Run the Docker build command. Parameter –f indicated which file to use. Parameter –t will name the image because you can’t name image inside Dockerfile. Dot (.) tells Docker to search for file inside current directory:

If you have latest CentOS image locally, Docker will use it. Otherwise it will try to fetch it from Docker Hub site.

Check that both images are now on your local system:

Check that container is running:

Browse the home page (it should display message from custom index.html above):

In multi-container world you can merge two or more containers into the one stack. Imagine classic three layer stack with front-end, business and database layer. You would normally start these services individually, configuring their endpoints and establishing communication between layers. Here you can define which type of containers will be part of multi-container world, network, storage, ports, environment variables and many more. You build multi-tier with docker compose. But you can always start containers individually with Docker run but this is more convenient way because you have dynamic file where you put all configuration.

Due its dynamic nature, multi-containers bring challenge in the form of IP addressing. Each time container is stopped and started there is no guarantee that it will get the same IP address. That’s way it is important to establish DNS services. Remember the network part where containers which use default bridge network do not have DNS services. Only containers with custom user network use built-in DNS server. Docker compose by default will always create custom network.

Compose is a tool for defining and running multi-container Docker applications. Compose is software as well as YAML file to configure your application layers. Dockerfile can be used in production, staging, development, testing, as well as CI workflows.

To build multi-tier container you need:

3) Docker-compose up command to start building

Building services with Docker compose install default network if not specified. Default network is built from scratch and includes project name (directory where Docker compose file is located), underscore and word default: projectname_default. In this way all containers are reachable on that network by hostname defined in file, there is no firewall between them. You can always use pre-existing network.

Docker environment variables is just one of the options you can put in Docker compose file. There are various way to set variables but two main options are direct assignment or assignment by file:

If your environment has more services that have common set of configuration data, you can use feature which is named extending services. You can set options in one place and use it anywhere. Your shared configuration is some kind of template.

This instructs web service to use all configuration defined by common.yml file.

In the following example you will learn how to deploy multi-tier application which consists of two images:

Docker file builds custom image from parent image python: alpine3.7. Copies app directory with source code and set app as working directory. After it installs all requirements which are defined in requirements.txt file. Exposes port 5000 to outside and defines app/__init__.py as starting point when run image.

File consists of two containers: app and db. App container uses previously build image which we called automation. It links to db container and exposes port 5000 to outside.

Second container -db uses clean mysql: 5.7 image and exposes port 3306 to outside. There are two environment variables which are set to successfully start mysql:

When you don’t specify network in docker compose file, Docker compose will create custom network. For example if docker-compose.yml file is in /home/john/ directory, custom network john_default will be created. Both containers will join this network and each container can now look up the hostname web or db and get back the appropriate container’s IP address. There is no firewall between containers.

Link keyword has two functions: dependency and extra alias by which service is reachable. In our example, for app to start successfully it is mandatory to have running database. In this case first database is up and then app is connecting to database. It is worth to mention that compose does not wait till container is ready, only running. For mysql full availability you have to define extra logic. Second function is extra alias which is just one way for services to reach itself by names.

Data will be stored in following path: /mnt/mysql/mysql57

7. Check that images are stored on your local system:

9 . Start docker compose in directory where Docker-compose file is:

10. Verify that both containers are up and running:

11. Start your favorite browser from host machine and enter ip address of virtual machine which is hosting containers: IPADDRESS: 5000. If you have installed docker on host just enter: 127.0.0.1:5000:

12. Select ESXI and if database connection is successful you should see following screen: 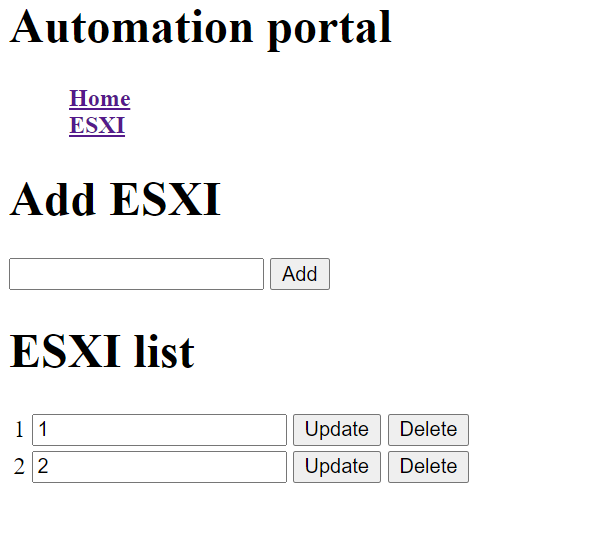