Containers do not write data permanently to any storage location. Docker storage needs to be configured if you want your container to store data permanently. This is not intentional because the containers are designed to be small, run quickly, with all backend storage outside the container. Once container is shut down and stopped, it no longer exists. When defined without Docker storage, containers store their data in so-called layers for which they need a storage driver. However, it is possible to preserve the condition of the container in three ways. The first two ways use host’s storage space: volumes and bind mounts. The third way writes directly to the host memory (tmpfs) and can be used for security reasons. 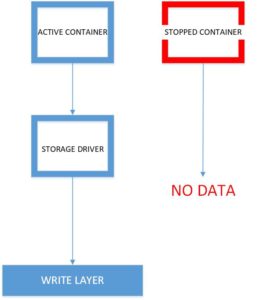 Docker storage distinguishes three storage types. Two types are permanent: Docker volumes and bind mounts. From container perspective, it does not know what type of storage is in use. The big difference between the two types is that volumes have dedicated filesystem on the host (/var/lib/ docker/volumes) and are directly controlled through the Docker CLI. On the other hand, bind mounts uses any available host filesystem. The third way of writing data is tmpfs, usage of the host memory. In the end, permanent storage does not increase the size of the container because the data is outside. 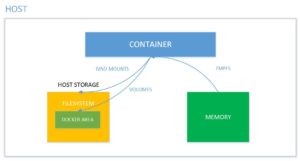 During volume creation, there are two flags that are quite similar but little bit different. Mount is a newer and recommended method of use, because there are many more options that can be defined during container creation and in some cases is the only option to use.

If we want to analyze container configuration we use command docker inspect:

We can see volume creation timestamp, driver, name, additional options and many more. Mount point where data is stored is /var/lib/docker/volumes.

Let’s create container with volume which is not created before:

Inside container  we create new mount point for volume:

On host side (/var/lib/docker/volumes) we can see new Docker volume vol which is created on the fly during container initialization:

If you want to create read-only volume it can created in following way:

We can see that second container can access test file:

If we want to use a remote permanent volume like cloud, we use Docker plugins. For the sake of simplicity, we will connect to another docker machine on the same subnet.

Second part includes creation of volume on another Docker machine on same subnet:

To display the current usage of images and container we use the docker system df command:

To remove all volumes use docker volume prune:

Docker bind mount is second permanent storage option but with more limited options than Docker volume. Docker bind mount cannot be managed via Docker CLI and is completely dependent on the availability of the filesystem of the host. Good to know is that host filesystem can be created when running a container.

We can see that /usr in container is empty:

If SELinux is activated, there are two flags that can be used during bind mounting: z (for sharing data between containers) and Z (for marking directory as private). Be careful if you mount some public directories such as / var and / etc as private.

In this situation we can only use volume flag:

Tmpfs is third storage option which is not permanent like Docker volume or bind mount. The data is written directly to the host’s memory and deleted when container is stopped. Very useful when it comes to sensitive data that you do not want to be permanent. A very significant difference is that containers cannot share tmpfs space unless they are running on Linux operating system. Two flags are used when creating tmpfs volume: tmpfs and mount. Mount flag is newer and supports multiple options during container startup.

Mount flag offers more options for mounting storage and one of them is the size of tmpfs:

Docker storage driver is responsible for creating container write layer to log all the changes during container runtime. When a container is started with an image, all layers that are part of the image are locked and read-only. Changes are written to the record layer and deleted when container is stopped. The driver creates Union filesystem that allows filesystems to be shared from all layers. This is the default way to store data in a container unless the storage technologies described above are used. It is important to note that extra driver layer brings additional performance overhead. It is not recommended to use default storage option for write intensive containers like database systems.

Let’s look at an example:

Container creates two layers: Ubuntu image and running yum update command. When the container is started, those two layers are started in read only mode. All changes are written to the write layer above. This is enabled by the storage driver. Default storage driver is overlay2.

If you start more containers from same image, all of them share the read-only layer. Only layer which is different is write layer. Each container has its own write layer.

Check storage use on disk with command docker ps –s:

All layers are stored on path /var/lib/docker/overlay2, where overlay2 is default storage driver.