Numbers are fundamental part of every programming language. Starting from Python 3.0 number types in Python programming language include three basic built-in types: integers, floats and complex numbers. Built-in means that Python already has those types included when you run and start type any program.

But there is more. Additional numeric types include Decimals and Fractions. In this case you have to include modules into your program in order to use them. This types are introduced if you want better precision control over floating types which we will discuss later in chapter.

At the end, there are several numeric subtypes like bitwise operators, Booleans, built-in functions and modules. In order to check what type some value belongs, you can use type () function or if you want to check if certain value is of specific type use isinstance () function.

We can see that variable a is integer type:

Check if variable a is instance of int class:

Integers in Python are positive or negative whole numbers without decimal number. They size is unlimited because in Python 3, all integers types which were used before are now merged into one big integer type.

Check the type of the variable:

First multiplication is performed (2*3) then result is added to number 1:

1 + 6 = 7. Multiplication has higher precedence and it is performed first.

But if we use parentheses result is different:

In this case, addition performed first and then result is multiplied with 3: 3 * 3 = 9. Parentheses have higher precedence over multiplication. 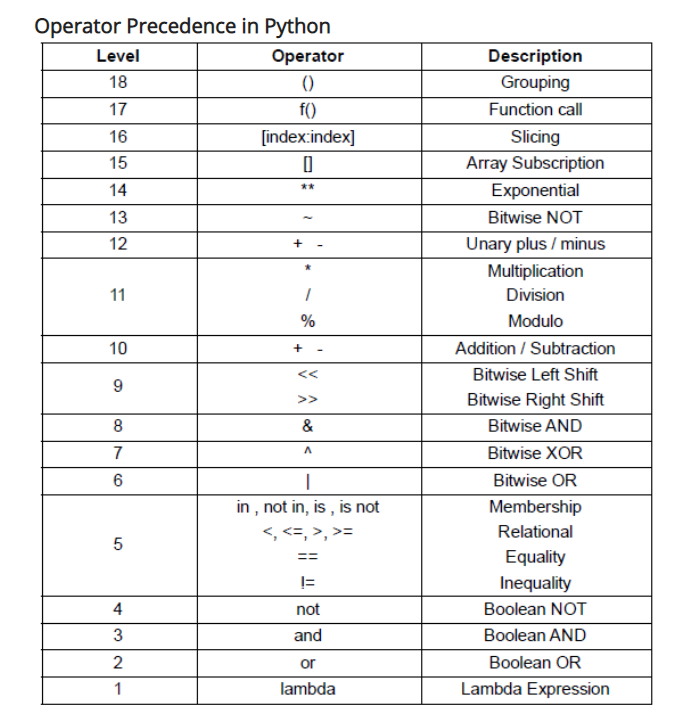 It is important to mention the operator overloading feature in Python as well in any language and what actually means. We naturally use + operator for addition. Usually you take two numbers and perform addition. But + and other operators have different roles in Python. For example if you want to concatenate two strings you use +: print (“a”+”b”) = ab, or print (4 * “a”) = aaaa. They are multiple example which we will cover across Python sessions.

Hexadecimal numeric system that represents numbers with base 16. Numbers in hexadecimal system go from 0 to F.

In Python, hexadecimal numbers are presented with 0x symbol:

Hexadecimal number A which has value of 10 in decimal world.

Let’s put this into Python:

Octal numeric system that represents numbers with base 8. Numbers in hexadecimal system range from 0 to 7. Represented in Python by notation 0o.

In Python octal numbers are presented with 0o symbol:

Let’s do the manual conversion:

Binary numeric system that represents numbers with base 2 and range from 0 to 1. Represented in Python by notation 0b. These numbers are recognized by computer and all numbers convert to 0 or 1 at the end.

Let’s do the manual conversion:

You can use built-in functions to convert decimal numbers to hex, octal or binary:

Displaying real numbers in binary fraction leads to round-off errors because some numbers can’t be displayed correctly in computer hardware. For example number 0.3333333…. can’t be displayed because it has unlimited number 3 after decimal point.

Starting from Python 2.7 and above, all real numbers are displayed in friendly way:

To make the rounding problems no so visible, normally floating point numbers are printed without their last digit, which is rounded. This is exactly to hide the problems you do not wish to see.

Display issue can be easily tested with this simple operation:

If you want to check how 0.1 and 0.3 are stored enter following syntax:

This combination of addition and subtraction can’t give exactly the 0.

You can see that a is not equal c, because of rounding problems with number 77,

Python presents 0.1 in binary fraction: 0.0001100110011001101 you can notice that there is pattern which is always repeating. Let’s remind ourselves how we convert decimal fraction to binary:

We stop when multiplication of fraction and number 2 is 1, but it never gets there. Because there is always repeating part of 0011 we have to stop somewhere because we don’t have unlimited memory stock.

Remember the story about IEEE754 where floats are stored in following notation:

Significate can’t be below value of 1 so we have to represent number 0.1 in following way:

Number 0.2 is displayed in the same way:

Addition of 0.1 and 0.2 gives following result

Decimal are numbers which are based on floating-point model, designed for people who do calculations like in school. Computers must provide arithmetic that people learn in school. Decimal numbers can be represented exactly with precision you want. Decimals and floats are incompatible when it comes to arithmetic. By default Decimal will digit number depending on entered values. If values have one decimal point result will be decimal point. Exception is division with infinite decimal numbers (irrational numbers) where default precision number is 28.

Decimal numbers are not embedded in Python, you have to call module decimal to activate decimal numbers. Decimal number take strings as arguments (‘0.1’). Without quotes it is just another float number. Usually you use it when making applications (finance) with exact decimal representation or to control the level of precision.

You can always check what is behind last decimal digit:

There is big difference, floats which are binary based displayed results which is not 0 but Decimals displayed 0.0.

Precision is set by default to 28 digits when doing division operations with irrational numbers:

Precision can be set (example for 4 digits):

When talking about money you can set precision to 2:

If we set decimal precision to 1, during division operations result will always be lower number by default:

You can change the behaviour:

The sqrt method allows us to get the square root of any Decimal with the designated level of precision:

Fractions provides support for ration number arithmetic and representing fraction number in the same way the Decimal numbers. To use Fraction you need to import floating module just like you need to import decimal module to use Decimal numbers. Fraction instance can be constructed from strings, integers, floats, decimals and rational numbers. Fractions are immutable and hash able inheriting abstract base class numbers. Rational.

Let’s take a look a basic math operations with Fractions:

Fractions can take floats as arguments but it that case, display will not be nice:

If we put quotes that means that we are passing string as argument and result is completely different:

Other example of Fractions:

It is possible to convert between float and fraction types. To convert Float to fraction it is handy to use .as_integer_ratio () method which returns pair of integers with positive denominator:

Set value a to 1.5. Use the as_integer_ratio method to return pair of integer which are input values to Fraction method. Result is Fraction(3,2):

If you want to convert Fraction to float best way is to use float method:

When using mixed types in operations float is the winner:

Python like the C programming language includes operators which represents integers as strings of binary bits. It is handy when to use when dealing with serial ports, binary data, inspecting network packets and many more.

Shifting number 2 one bit to the right gives back the number 1:

How do you display integer in binary notation? You can do it like this:

Python 3.1 and 2.7 introduced cool feature to display how many digits you need to display:

Booleans is logic operator which has two values: True or False. But from Python point of view, Booleans are numbers. True and False are instances of class bool which is just one of the many subclasses of built-int type int. True and False have values 1 and 0 but different printing logic.

Following values are False in Python:

All integer values expect 0 are true:

Evaluating the result is easy:

Standard AND, OR and not operators:

Beside Python literals you can use standard built-in mathematical functions (abs, pow, min, max, sum) and module functions (rand, math) which include sin, cos, sqrt, floor, trunc, round and many more.

Square roots can be computed with built-in and module functions and expression.

One of the interesting module function is random function which randomly picks floating and integer numbers: