In this chapter, we are deep diving into the Docker swarm world. Now, the focus is more on Docker service within Docker Swarm as an integral part of the architecture. Read and practice how to create service, configure rolling updates, configure persistent storage, establish port forwarding and many more. Let’s go…

Docker engine does not run in swarm mode during initial installation. Swarm mode must be activated explicitly or you can join an existing swarm. Once enabled, services are handled via the Docker service command. Swarm increases service availability and enables cluster mode operation. You can think of Swarm as a transition from individual mode to cluster mode. Let’s see what happens when Docker Swarm init is enabled: 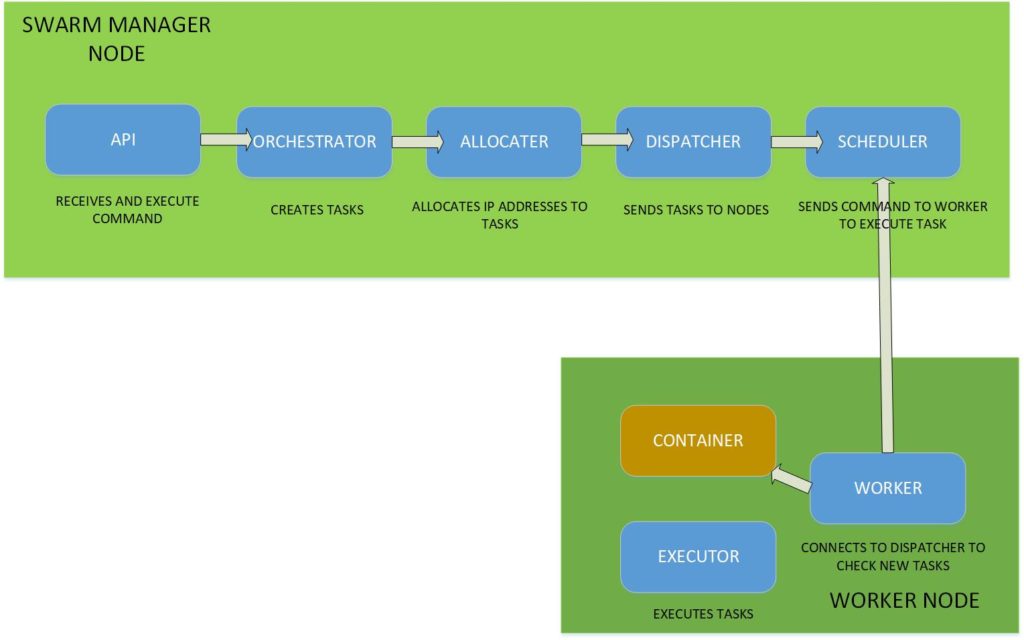 If you do not define the address space during Docker swarm initialization, a default one is assigned – 10.0.0.0/8. We can always configure our own subnet space if default one overlaps with our address space or any other reasons. This is done via the default-addr-pool parameter. Additionally, with the default-addr-pool-mask-len parameter, we define the size of the network mask.

From the previous example notice that parameter advertise-addr was used with value 192.168.78.3. Manager node advertises itself to other nodes via this address.

From the same example above you can see that token was generated for all potential worker swarm members. The procedure is slightly different for potential node managers. It is advisable to rotate tokens every couple of months to protect the entire cluster. The old token will remain valid as long as it is used by existing cluster members.

Add workers (swworker1 and swworker2) in the following way:Notice that token parameter which was generated during swarm initialization was used, and the IP address of the leading manager node.

To monitor node status use the command docker node ls:

Notice the columns STATUS and AVAILABILITY. All nodes are ready and active.

Degradation to worker node is done with docker node demote:

To leave swarm cluster use the command docker swarm leave:

All containers that were running on that node and recreated on first available node to maintain cluster state.

In the declarative model used by Docker swarm, the defined service state must be maintained. What does that mean? For better insight, let’s look on what states Docker Swarm keeps eye on:

During service creation, you can define a number of parameters such as the name of the service, version of the image, command that is executed after the container is started, persistent storage, network, number of replicas and many more.

Configuration can be changed during service run. For example, to add ports use publish-add parameter:

Mysql service is active and listening on port 3309.

When running a container, it is possible to define the large number of parameters such as environment variables, working directory, or user under which the container will be run.

Check the running container and mark its name:

Go inside the container:

Notice that the working directory is /tmp, one defined during container initialization

Environment variable VAR is set to value test as defined:

We are talking about two types of port forwarding (exposing service to outside world): routing mesh and direct route exposure to Docker Swarm node. The difference is that the routing mesh presents the service on each node, regardless of whether the task runs on all of them while direct exposure is tied to a specific node.

To create routing mesh define service nginx with two replicas. Internal nginx port is 80 which is mapping to host port 8080:

This means that one host is free but still the host listens on port 8080 and forwards traffic to the container on the neighboring host. All hosts participate in load balancing no matter how many replicas are in the cluster.

Check that service is connected to ingress network:

You have the freedom to create your own overlay network:

To create service with custom overlay network use network parameter:

Interesting parameters you can use are network-add and network-rm to add network on fly or remove it.

Swarm cluster provides the ability to control scaling and installation of services on specific hosts:

If you try to create service with 1CPU and 2GB of memory deploy will fail because there is no enough memory:

Drop the requirements to 1CPU and 800MB of memory and service will deploy without issues:

Global services need parameter global, no need to define number of replicas because containers are spread on all nodes:

Service is created on all nodes:

You can limit the provisioning of services to nodes with specific metadata defined.

Notice that three replicas are created:

But all three replicas are running only on swworker1 as only node with metadata datacenter=main:

This method places containers on nodes that have a specific label based on the spread algorithm. This means that the Docker will try to evenly distribute the containers to nodes with a specific label, but will also attempt to allocate them to nodes that do not have that label. Feature is not forced and is of the lowest priority which means that all previous features are executed first.

Notice that containers are running on metadata nodes swworker2 and swmanager:

Create service with replicas to check where third container will be placed:

Third container is running on swworker1, the node that has no metadata defined:

There are many options when upgrading a service with a new version of image. By default, the update is done on a single container and if at any step goes wrong, the whole procedure fails. You can also define delay between containers upgrade via upgrade parameter. Upgrading the second container starts only if the first container is successfully upgraded and in running status.

Update the service with the latest version. Update delay is set to 10s, two containers in parallel and update continue if process fails in any stage of update:

If you want to downgrade version use rollback parameter:

Check that version is 3.4 again:

Finally, you can create a service that automatically reverts to an older version of the image if the upgrade fails. Create a service Centos with three replicas, two rollbacks in parallel, container monitoring for 20s in case the container shutdown, and 30% tolerance error:

For services, you can define some form of permanent data storage. In the article Docker storage you can see that there are two main types of permanent data storage: volume and bind mount. The main difference is that the volume has a separate file system on the host that is controlled via the Docker CLI, while the bind mount filesystem can be located anywhere on host and not manageable through the Docker CLI.

Data volume is a type of permanent data storage and is an independent entity which means that it can be pre-created and must be deleted separately.

Bind mounts unlike volume data can have filesystem anywhere on the host which makes less flexible solution for permanent storage: