In this section, we will explain the network used when operating the Docker swarm cluster. The Docker overlay network uses VXLAN technology to connect containers in the L2 network located on different hosts. In the introduction, we’re talking about architecture, external traffic going to Docker services, how DNS services works, different types of load balancing, and finally security and encryption.

The normal functioning and communication of the overlay network data layer require an additional layer to monitor, propagate the network state, detect errors, and quickly converge within the Docker swarm cluster. And here comes the Docker Network Control Plane, which is based on Gossip and SWIM protocols.

The layer on which the actual traffic takes place is based on an industry-recognized VXLAN protocol that connects multi-host containers across L2 and L3 physical networks. VXLAN encapsulates Ethernet frame with the additional information that is required for a packet to successfully reach its destination in a multi-host environment.

VXLAN has been an integral part of the Linux kernel for some time now, so there is no additional load on resources like CPU. VXLAN separates the overlay layer from the physical layer making this network highly independent and making applications highly mobile. 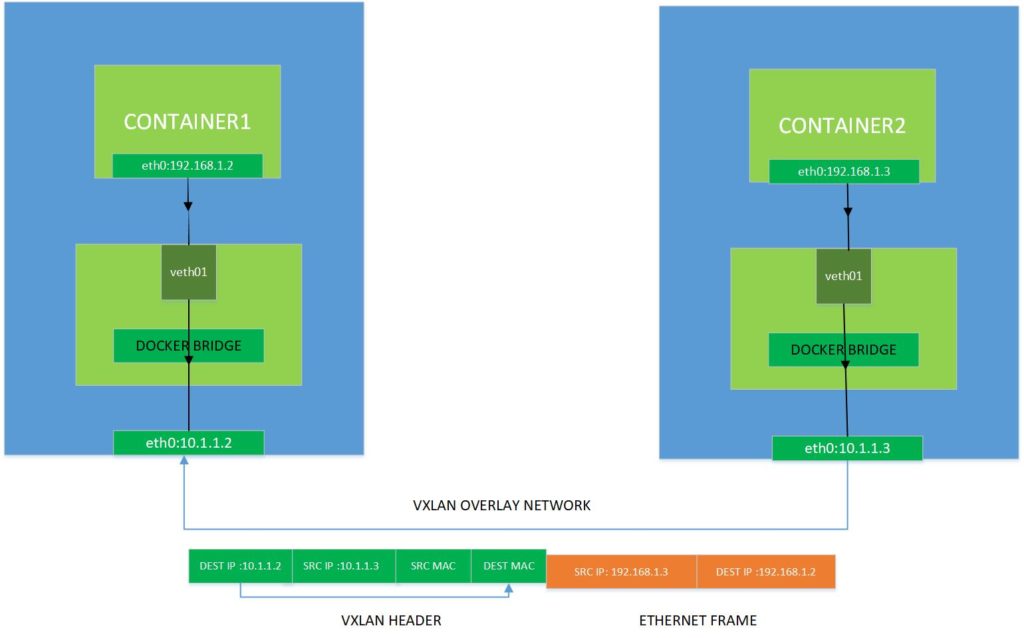 In this example, we will create an overlay network. It is assumed that a 3-node swarm cluster has already been created. More on this in the Docker swarm article.

When swarm cluster is initialized, a default ingress overlay network is created:

If you want to create own overlay network it done this way:

Create container centos and attach it to overlay-to-attach network:

On second node (worker) check that overlay-to-attach network does not exist:

Create a second centos2 container on another node and join it to overlay-to-attach network:

From first container ping second one:

When initializing the Docker swarm cluster, depending on the IPAM driver, a subnet network is defined. If default overaly network subnet is in conflict with your existing infrastructure, the predefined subnet can be changed.

Check which subnet is currently assigned to the default network:

Docker Service exposed to outside world

Once port is exposed for Docker service, it is reachable from outside world. If the service is defined by two or more replicas, then Docker load balancing mode is activated, as part of the routing mesh configuration. Each host participates in load balancing regardless of whether the service is started on it.

Alternative way to access service from outside world is to bypass routing mesh configuration. Service is exposed on dedicated host. In this case, make sure that the service is active on that host because it will not be available otherwise.

Example1 (Exposing ports from outside world)

Create service nginx and expose port 80 which is mapped to port 8080: 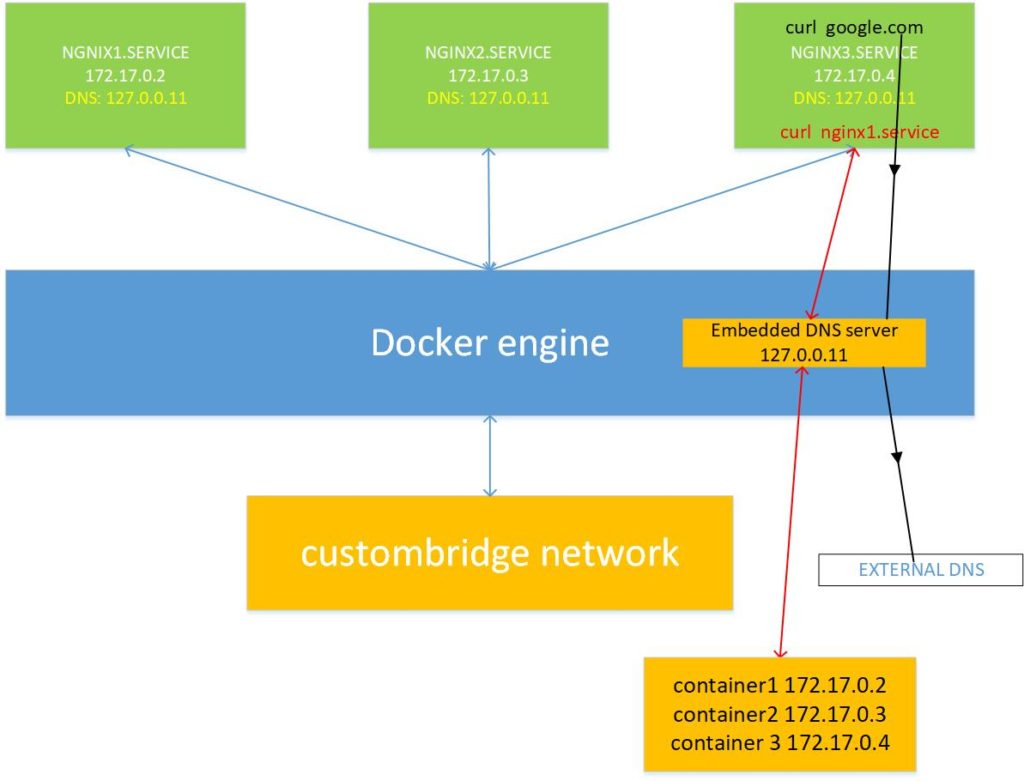 1) If the services are on the same subnet and use specific subnets, an internal DNS server is used

2) If the services are not in the same subnet, an external DNS server is used

Routing mesh mode does load balancing in the way that every host participates in balancing regardless of service running on it. To have this working, you should expose container ports to outside world. The Docker Engine for L4 Load balancer uses integrated Linux kernel functionality – IPVS (IP Virtual Server – embedded L4 load balancer) and iptables. Usually an external load balancer is added to this combination as one of the services (for example nginx) or a physical component.

Load balancing that runs on the seventh ISO / OSI layer.

Security and encryption are implemented on data and control plane.

Docker data protection is based on a distributed firewall that is implemented with iptables functionality which is integral part of the Linux kernel. The firewall blocks traffic between different networks and controls open ports to the outside world. The following rules apply:

Traffic is allowed in all directions for all default Docker networks.

Traffic is blocked in all directions for all Docker networks.

From service to the outside world (Egress traffic)

Egress traffic is allowed to the outside world with host statefull firewall which controls responses. Applies to all Docker network defaults.

Traffic from outside world to services

Not allowed by default for all default Docker network except MACVLAN network where incoming traffic is allowed.

Data-level encryption is implemented using IPSEC framework and the AES encryption standard. Traffic is encrypted after it leaves the container and before traffic reaches the physical network interface on the host. It is decrypted before entering the destination container. 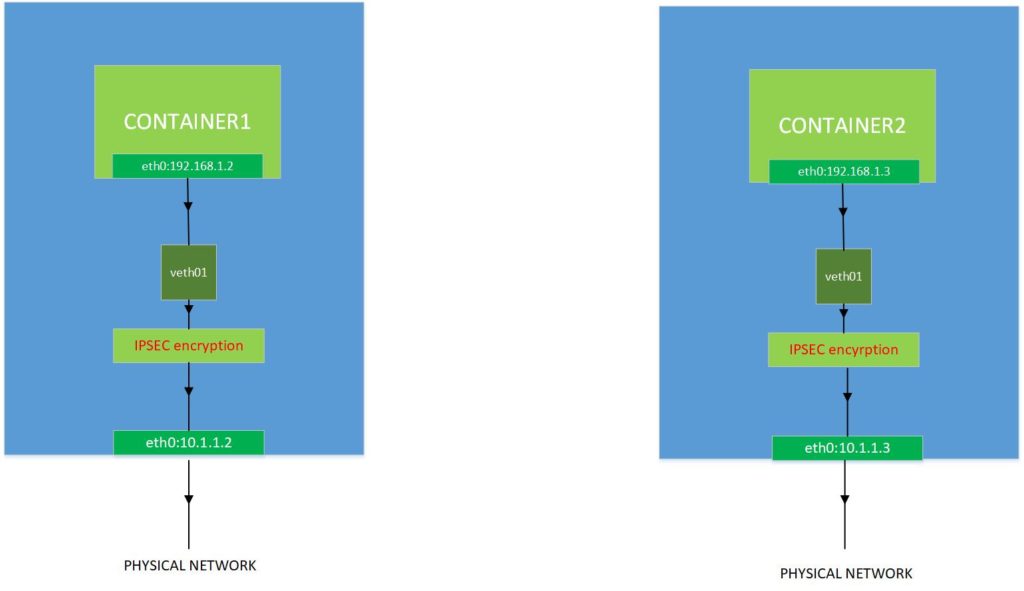 Data Plane is a secured with Integrated Public Key Infrastructure (PKI). All manager-manager or manager-worker communication is encrypted with the TLS protocol. The leading node manager, the node from which the Docker swarm was initially created, is certificate authority (CA) that issues and sends certificates that is used for authentication of potential members of Docker swarm.