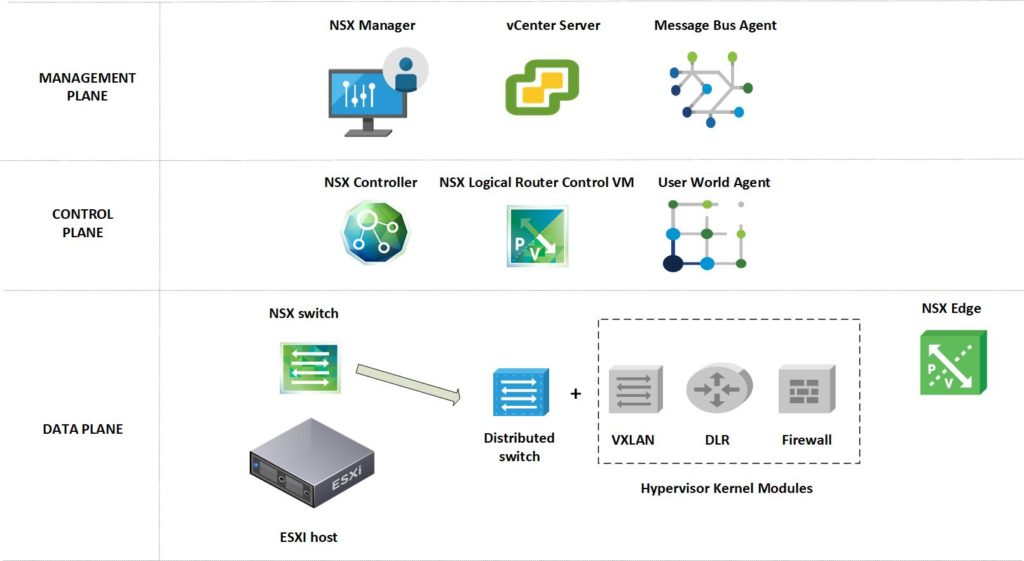 Let’s check the main components of NSX architecture. More details can be found in this great book.

The data plane is the VMware NSX layer where network traffic takes place. NSX components are installed directly on the ESXI host via the NSX manager. If all the other layers do not work, the existing network traffic will continue to flow. Additional NSX components are installed in the form of standard VIBs in the hypervisor kernel: VXLAN, Distributed Logic Router and Firewall. Only component that is not installed as VIB but virtual machine is Edge gateway. NSX switch or logic switch is a standard distributed switch with additional functionality (VXLAN,DLR and Firewall).

VXLAN allows L2 network traffic to pass through L3 network devices creating an additional network tunnel, which is used for traffic flow. VXLAN adds the additional payload to the standard network frame (MTU 1500). Standard MTU size should be extended to 1600.

Distributed logic router (DLR) is part of the L3 network. Main reason for introducing this component is avoiding the so-called “hairpinning” effect, where every time a virtual machine sends traffic to another subnet, traffic has to leave ESXI host and go through a physical L3 router. Directing routing functionality to the ESXi host itself, i.e. the kernel hypervisor, there is significant optimization and resource savings together with the significant reduction of unnecessary network traffic. DLR is installed on every ESXI host where it is used as classic L3 router between all virtual machines. Of course, instead of physical Ethernet and Fast Ethernet interfaces, DLR contains logical interfaces called LIFs that are used as the default gateway for virtual machines.

NSX Edge is a multi-functional virtual machine that is not part of the ESXI kernel and has the following features:

Unlike the DLR, NSX Edge is installed on the perimeter of the data center network and serves as the north-south traffic end point. In other words, it splits the traffic that takes place between ESXI hosts (east-west) from the outside world (north-south). Installation process is done through the NSX Manager responsible for installing and managing the entire NSX architecture. NSX Manager is part of the management layer.

The VMware NSX control layer consists of: vCenter, NSX Manager, and Message Bus Agent. vCenter and NSX Manager are always in the 1:1 relationship, i.e. if you have more vCenters you need same number of NSX managers.

NSX Manager is the central place for managing the entire NSX infrastructure. Primary features are:

Message bus agent is a communication bridge between NSX Manager and ESXI hosts.

Consumption Model communicates with NSX Manager via the API and consists of self-service portals, Cloud management, vRealize Automation and many more.