VMware NSX firewall provides isolation and micro-segmentation to improve security within the data center. Three types of firewalls exist in VMware NSX architecture. VMware NSX Edge Firewall is installed as a virtual appliance, providing the same functionality as a physical perimeter firewall. In NSX terminology, Edge Firewall protects north-south traffic as well as routing between physical VLANs that are connected to a distributed switch port group. If you are preparing for NSX certification, firewall configuration is part of each exam.

Inside the data center’s network, NSX Distributed Firewall protects east-west traffic. Two firewalls above are installed in combination or separately. It is very important to mention the Service Composer, NSX component that enables high-level automation within the NSX firewall using functionality called dynamic tagging. Firewalls are deployed as part of installation by NSX Manager. 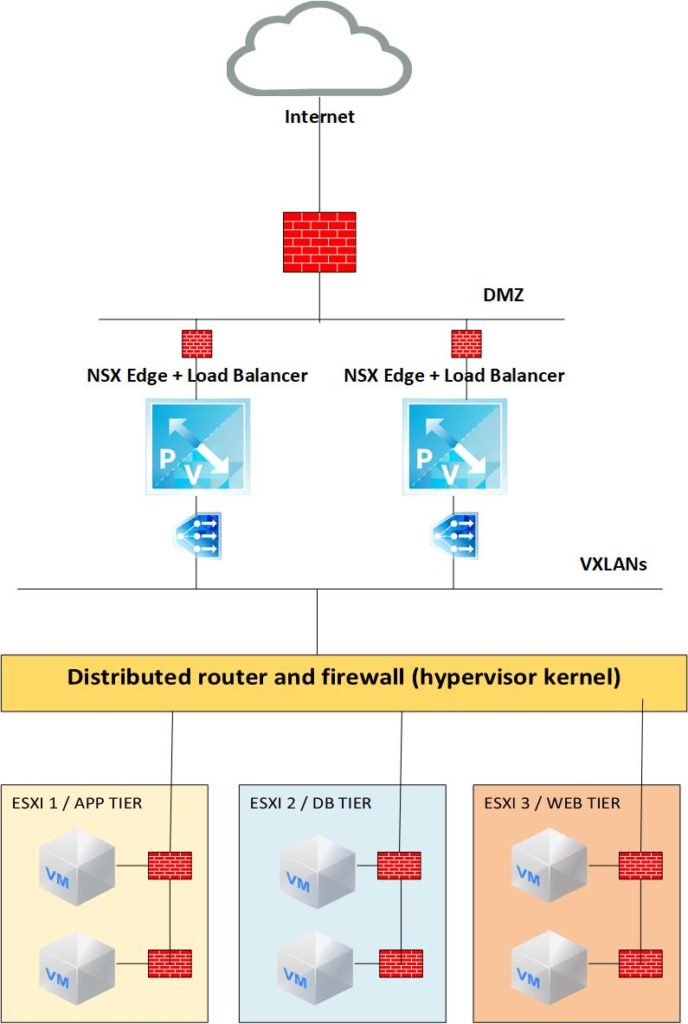 Distributed firewall allows you to create L2, L3, and L4 rules. By default, all network traffic is denied (default deny all rule). All rules that are additionally created sit on default rule. When inspecting the package, the firewall rules are always analyzed by deny all rule and going up the user defined rules. It is an integral part of every ESXi host, installed in as a VIB on ESXI host, designed to provide protection, isolation and micro-segmentation of east-west traffic.

Distributed Firewall takes advantage of micro-segmentation to apply security rules to various objects such as security tags, IP addresses, MAC addresses, virtual machines, port groups, logical switches, directories, clusters as well as user accounts in Active Directory. Distributed firewall is the stateful firewall, which means that is monitoring the state of active connections and using that information to determine which network packets can go through. Learning NSX gives more details about the NSX Firewalls.

The service composer serves as a static and dynamic generator of security rules and it is VMware NSX Distributed Firewall extension. First, the objects and services we want to protect are defined and mapped to specific security groups. Security groups are mapped to the virtual machines.

The first step is to create a security group (objects) we want to protect. Groups can be static (referring to a single virtual machine) and dynamic where the “membership” can be determined in several ways:

VMware NSX security policies are the collection of network and security services:

VMware NSX Edge is a multi-functional network and security component that is part of a data and control layer, providing following services – NAT, routing protocols (OSPF, iBGP, eBGP), firewall, load balancing, DHCP/DNS and VPN functionality where the primary focus is north-south traffic. As we can see NSX Edge is used for much more functionality than a just firewall service.

Edge Firewall can set default firewall configurations such as denying or allowing everything. You can also add specific firewall rules that have the advantage over the default ones. The Edge Gateway firewall helps to create security rules on the perimeter of the network, such as installing a DMZ-based IP/VLAN sets, or isolating organizations within the same virtual data center. All firewalls are included in the standard NSX license.