Kubernetes is Google’s open-source orchestration tool for managing containers like Mezos and Docker Swarm. It was officially launched in 2014, where Google saw opportunity to drive customers to its cloud services. Kubernetes became very popular managing container runtimes like Docker and it is capable for orchestration of complex applications, load balancing, security, networking, storage and many more. Kubernetes cluster offers many features and benefits like automation of application deployment, scaling and management. Very handy in automation many boring manual tasks with Linux operating system.

Kubelet – agent which is installed on every node, executes commands from Kube API like creation and destruction of containers

Etcd is Kubernetes brain, used as distributed reliable key-value store which is simple, secure and fast. It stores all configuration, status of running workloads, roles, configs, secrets, nodes and many more. Etcd is distributed across all defined master nodes and replication is done by RAFT protocol. Service listens on port 2379. It can be managed using etcd tool which is installed separately.

Crucial component on master nodes which is used to authenticate requests from external users and executes commands by delegating instruction to kubelet service which is installed on worker nodes. It retrieves information from etcd database (only component which interacts with database), and also taking input from internal Kubernetes components like controller manager and scheduler.

Manages nodes and containers, taking proper action. Creates and destroys new nodes and pods. Node controller monitor nodes every 5 seconds. If stops receiving heartbeats, nodes is marked as unreachable (40 second). After unreachable it gives 5 minutes, and then removes nodes are provision pods to another.

Responsible for scheduling pods on nodes, used only for decision and not execution, it does not actually place pods but informs Kube API server. Determines which nodes are suitable for placement of new pods.

Kubelet is agent running on each worker node which implements all activities on nodes, build pods, unload pods, registers nodes to Kubernetes cluster and sends reports. It is actually builder taking commands from Kube API server.

Network proxy component installed on very worker node. When you build pod network you are not sure that pod will keep its IP address each time it is recreated. So we create logical construct service which always holds static IP address. Pods are then access through service. Kube-proxy then comes to play by creating rules to forward traffic to each service by implementing IP table’s rules on Linux machines.

Kube proxy is virtual IP services which uses IP tables inside nodes to route traffic to target pod. IP tables are capturing traffic and redirect it to backend services. Linux kernel capability net filter handles the traffic. So why proxy and not the DNS? Well, DNS sometimes do not go with defined TTLs and caches the results even when records are expired.

Kubernetes has built-in DNS service which name is CoreDNS. It works directly with Kubernetes API and creates DNS records for each service.

Pods are smallest deployment unit you can create on Kubernetes cluster. In virtualization terminology pods are virtual machines running with defined service. If you remember Docker world, you have containers, but containers in Kubernetes are encapsulated in pods. Usually there is one to one relationship between containers and pods, but there can be more containers inside one pod. That is true in cases where you have basic and helper container in one pod.

Docker is by default configured to get images from Docker Hub. In other words, if you run command kubectl run ngnix, Docker will check Docker Hub by default. Nice to start but not recommended to pull images from public repository.

Get all running pods:

Everything you create in Kubernetes it is in form of objects and yaml format. Pods are also created as objects:

Objects which is responsible for defining how many pod replicas you will run in the cluster. Ensures high availability, load balancing and scaling.

Scaling is procedure of changing defined number of pod replicas. It can be done in several ways:

#kubectl get deployments (it will automatically create replica set) 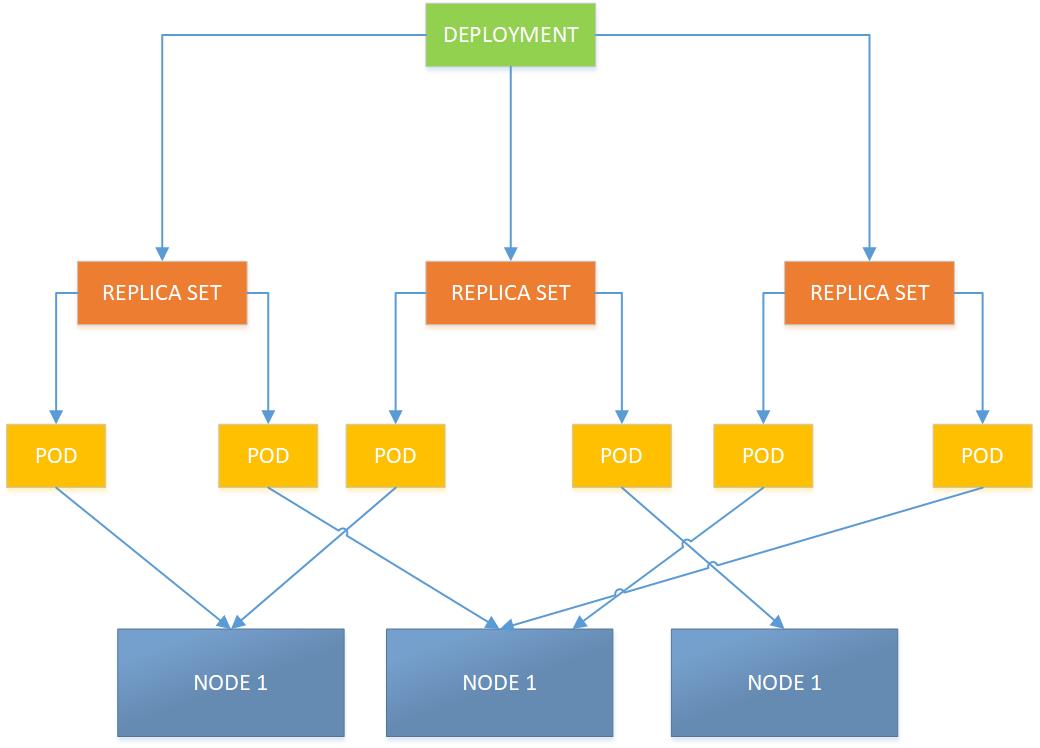 Notice that you can create pod and replica set objects, but creating deployment object it will create all objects in one row.

Imagine two or more projects installed on Kubernetes cluster. There should be some way to organize cluster in isolated sections. We can say namespace is isolated virtual projects which is bounded to pods and all infrastructure related to one project. Once you create Kubernetes cluster, default namespace is created (kube-system) which runs several pods which deliver various internal cluster services – networking, DNS, control plane and many more. It possible to establish communication between different namespaces.

Default DNS zone in cluster is cluster.local. So the full pod name would look like this:

dev – name of the namespace

web – name of the pod

Get pods from default namespace:

Get pods from all namespaces:

Resource quota objects are used to set constraints in order to limit resource consumption like CPU and memory. Very useful because if you do not define resource quota, namespace will have unlimited resources at its disposal which can lead to unexpected behavior.

In example above we specified hard limits for namespace which means those values cannot be exceeded. Request limits are resources which are guaranteed to namespace to even start. Limits are top bound resources namespace can get. Memory limits are usually set to Megabytes (Mi) and Gigabystes (Gi). CPU is always set in milicores:

Services are Kubernetes objects used to expose pod or group of pods as a network service with static and constant IP address and fully qualified domain name. The need for services came into the mind of Kubernetes architects because you can’t rely on PODs IP address. What does it mean? Well, pod get IP from network CDN and you can’t guarantee that this IP address will be constant all the time. Pods are restarted, recreated and destroyed and each of this actions will change it IP address.

ClusterIP: (Default service to expose pods only inside the Kubernetes cluster)

NodePort: (Expose the service on each Node IP’s. You are able to contact service from outside).

Service myservice with namespace mynamespace exposing it on port 80 with Cluster IP. Notice the selector in which we connect application with service.

Nodeport opens specific ports on each node and forward external traffic directly to your service. There are many disadvantages with this setup: only one service per ports, you can only use ports between 30000-32767 and if Kubernetes IP is changes you have to do modifications with nodeip configuration.

Load balancer is most convenient way to expose traffic to external world. Instead of using internal proxy service to route traffic you can define software or hardware load balancer to the job. Network Load Balancer has unique IP address which then forwards traffic to your service.

Once created, services are not exposed to external world. Kubernetes ingress objects allows HTTP and HTTPS communication from outside to internal Kubernetes services. Routing is controlled by certain rules which you can define. In other words you define which external source can access Kubernetes service. Ingress controllers are systems pods and usually installed as NGINX and HAProxy service.

In Kubernetes world you can do the things in two ways: imperative or declarative mode. Imperative mode tells you what to do (step by step) and how to do it. Declarative mode will specify destination only, no specific details, just what to do.

This is example of imperative mode:

Imperative mode in Kubernetes include running plain commands which you run once and forget:

Last command will just edit and change kubernetes object in memory. Better approach will be to use replace command: kubectl replace –f centosdeployment.yml

Command will check existing configuration and figure out what changes has to be done in the system. If object does not exist, it will create one. It does not throw error that pod does not exist

Manages objects in declarative way. There are three types of Kubernetes objects for same instance:

Why do we need last applied configuration file?